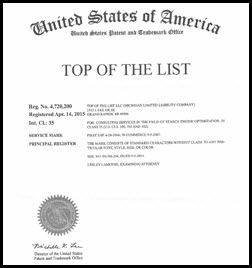 June 2015 — Top Of The List is quite a fitting name, don’t you think? In an industry where reaching the top of the list is the name of the game, Top Of The List owner Beverly Mapes decided to begin the process of legally trademarking the company name.

“With a name like Top Of The List, especially for what we do, it seemed necessary to go through the process to have the name trademarked,” Beverly explains.

The process took about 8 months to complete, beginning with research to find any other companies that may already be using the name. Jennifer A. Puplava of Mika Meyers PLC was retained for this process and discovered that another company did have the same name. However, the software company was unrelated to Top Of The List’s line of business, and in fact, appeared to be out of business.

In September, a trademark form was officially mailed to the USPTO (United States Patent and Trademark Office). That office performs its own search and arrived at the same opinion about the Top Of The List name’s previous use.

After just over 4 months — a record time according to Ms. Puplava — the USPTO replied to the application citing no issues or questions regarding the application. At this time, the Top Of The List trademark application was published for opposition in the USPTO Official Gazette, allowing third parties the opportunity to file an opposition within 30 days of publication.

Finally, a Certificate of Registration was issued by the USPTO, and Top Of The List received its official registered trademark document.

All in all, obtaining a registered trademark was fairly simple, and primarily involved paperwork and waiting. “We were very pleased the process went so smoothly,” recalls Beverly. “Having the company name trademarked is yet another step in moving Top Of The List to the next level in its strategic business plan.” 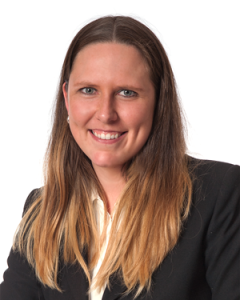